Spiders are a huge component of the terrestiral arthropod community in the arctic north.  With each footfall on the tundra, ground-dwelling wolf spiders can be seen scattering left and right, the females dragging round egg sacs on their abdomens.   Occasionally I saw pretty crab spiders lying in wait on flowers, and found one clever individual gorging itself silly in a corner of my Malaise trap.  What I didn’t see, for the first few weeks, was a proper orb-weaving spider…the quintessential arachnids responsible for the round, ornate webs we all tend to associate with this group of animals.

I finally figured out where they like to “hang out”: at the base of the cliff, there was a mound of huge rocks that had cleaved from the cliff face some very long time ago.  The rubble pile was all sharp edges and angles and gaps large enough to admit a human.  And apparently large enough to meet the needs of the orb-weavers: 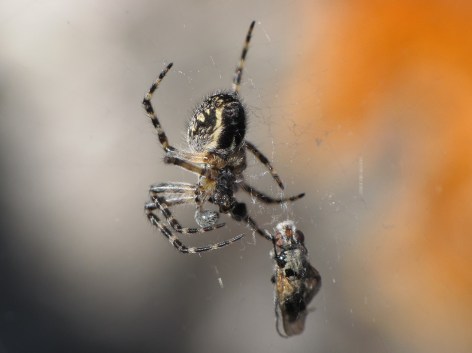 This lovely creature (a male – you can tell by the boxing-glove-style pedipalps) was preparing for a meal.

Here’s another individual (female, I do believe), showing the pretty yellow and black markings: 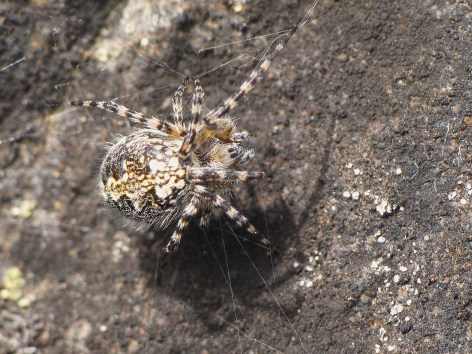