Snake in the grass

My first reaction upon spotting this gorgeous critter in my back yard was “OH CRAP, NO!!!”

Not because I’m snake-phobic or that I was unhappy with it being on my property, but because the lawnmower I was pushing passed over it a millisecond before my brain processed the identity of the tiny brown squiggle in the grass.  I lifted the mower and killed the engine as fast as I could, and was relieved to discover that, other than probably being frightened out of its wits, the little snake was unharmed. 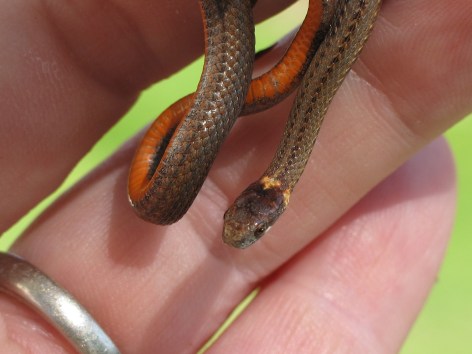 And what a find! The size of an earthworm, this glistening, sleek, brown beauty with a startling burnt-orange belly was a reptile I’d never before encountered. I ran inside with my prize so I could get my camera and document the event. “It’s an eastern red-bellied snake or something like that”, I said to my wife, who exclaimed over at the animal’s beautiful colours and markings.

These little guys grow only to 12″ long; they feed on suitably small prey items, such as slugs, snails, earthworms and occasionally tiny frogs. Shy, secretive and gentle (this little one never tried to bite and remained quite calm during its time in my hand), they’re seldom seen despite being relatively common.

I set the snake back down in a safer (mower-free) patch of grass and managed only to fire off two more quick shots before the lawn swallowed it up and it disappeared from sight.

Non-arthropod Fauna, Reptiles and amphibians Nature
← Weirdness in the woods I have a new flash. It makes me gleeful. →

12 responses to “Snake in the grass”

Error: Twitter did not respond. Please wait a few minutes and refresh this page.