Yes, I was ignoring my blog this week.

I am working on a new project that developed when some really interesting samples came up from one of our sites in the Northwest Territories – beetles parasitized with hairworms. I’ve posted about these before, but this site is special because there are SO FREAKING MANY OF THEM. It’s crazy. I have a new collaborator in the U.S. who is going to ID the worms for me, and I’ve been working my tail off to get all the hosts ID’d. 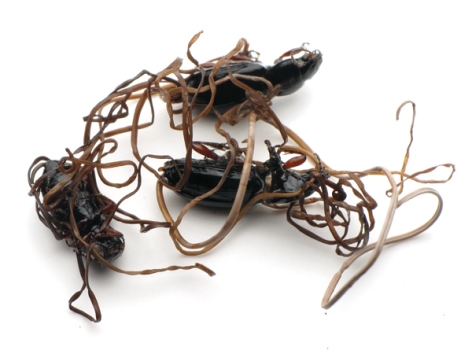 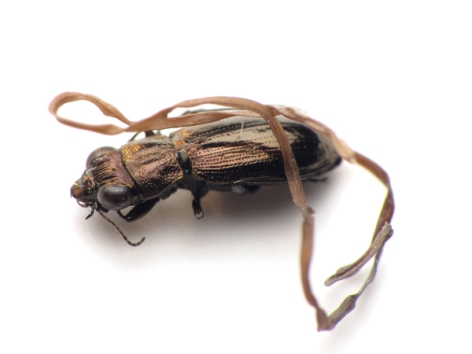 Anyone who follows my Twitter or facebook accounts is probably sick to death of hearing about beetles with worms.

I promise I’ll try to talk about something other than squiggly things creeping out of beetle’s butts next week, ok?

There’s not a ton of diversity in the samples so far, and I was starting to get a little bored, until I saw this:

Say it with me now: “EWWWWWWWWWW“.

This poor ground beetle (family Carabidae) has been parasitized by a nematode-like worm called a hairworm, or “Gordian worm”, (Gordiaceae: Nematomorpha).  Adult hairworms are free-swimming, water-dwelling animals (either in fresh or salt water). They mate and produce young (larvae) in the water.  The larvae require two hosts. First they infest various small arthropods (called paratenic hosts), like mosquito larvae. Next, those small paratenic hosts are consumed by other, larger arthropods – ground beetles fit the bill since they are heavy-bodied, voracious predators.  Worldwide, at least 70 species of ground beetles are known to be hosts for hairworms.

When the worm is mature, it has to leave its host and return to the water to reproduce. If it has infested an aquatic insect, it has no trouble making its way back to the water. However, if it has chosen a terrestrial insect as a host, things get a little more complicated.

Like so many parasites, the hairworm can use a type of mind-control to affect the behaviour of its host. In this case, it compels the terrestrial beetle to seek out water, then drown itself. Yikes! For this beetle, which I caught in a yellow pan trap, I can envision one of two scenarios: 1) the worm was mature, and convinced the beetle to take a dip in the preservative fluid in the trap, or 2) the beetle just happened to wander into the trap, and the worm decided to abandon ship. Whatever happened, it was not a happy “ending” for either animal!

Not a happy ending.

I selected this post to be featured on my blog’s page at Nature Blogs.