A fungus ate this moth’s head

It’s been far too long since we’ve had a good gross-out parasite post, so let’s rectify the situation, shall we?

I captured this gruesome scene at the end of June, in the park where I was camping. 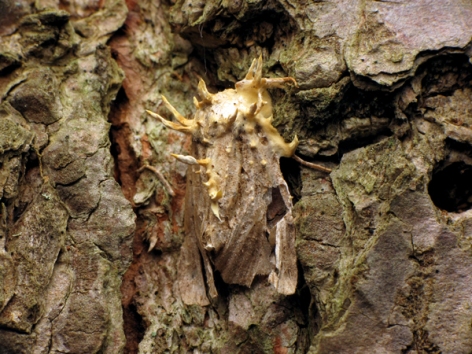 This poor unidentifiable moth met a horrifying end in the grips of an entomophathogenic fungus, which, though technically not a parasite, is nevertheless growing gangbusters out of the moth’s head.

While non-pathogenic fungi use less gory approaches to dispersal and propogation, relying on things like wind and water, entomopathogenic (EP) (entomo=insect; pathogenic=disease-causing) fungi use insects and other arthropods as their food source and means of spore transmission.

EP fungi produce spores that attach to, sprout on, and penetrate the outer shell (or cuticle) of their host.  Once they’ve breached the outer barrier, they feed on the nutrients available inside the host, ultimately killing them. What you see in the photo above is the final stage – the host has been killed, and the fungus has produced mature fruiting bodies from which more spores will be produced.

One of the most fascinating aspects of these fungi is their ability to alter their hosts’ behaviours – sometimes in ways that maximize the likelihood of spore dispersal, and sometimes in ways that actually harm the fungus and help the host fight off the infection – there seems to be a finely tuned evolutionary tradeoff at play in these systems that permits both the fungus and the host to persist and thrive despite the unpleasantness of the interaction between them.

For example, a fungal infection may lead a host to seek out sunlight or other sources of heat; by raising their body temperature (a so-called “behavioural fever”), the host can sometimes make its body inhospitably warm for the invader. Other EP fungal infections, such as those seen in pea aphids, can cause an infected aphid to move to unusual, more exposed parts of the plant to feed. This could be the fungus’ way of ensuring better spore dispersal, or might be the aphid’s way of preventing the fungus from spreading to the rest of its colony. Some fungi seem to make female hosts more attractive to males (presumably to aid in spore transmission), while others cause hosts to seek out elevated sites before their deaths (as was most likely what happened to this moth).

This is all terribly reminiscent of the mind-controlling hairworm I posted about last year, and behavioural changes have also been shown to be induced by insect parasitoids; it’s clear that behaviour modification is a useful strategy for many organisms that rely on a host to complete their life cycle!
_____________________________