I swear to GOD it’s easier to get into a PhD program than it is to replace a !#$%^*& busted tire.

One flat in the middle of nowhere, one tow truck, one spare, one sloooooow drive into town, one freakout at a car dealership, one MIA technician/botched invoice at a Canadian Tire and waaaaaaay too many hours later – I’m quite sure I would do anything (yes, dammit, I said “anything”)  in exchange for the name of a competent mechanic.

I really don’t believe in a higher power, universal energy, or even karma (although sometimes I like to pretend I believe in karma, ’cause it might lead to a meanie getting a well-deserved bite in the ass.  Yeah, I’m vengeful that way).

But, sometimes, I get the eerie feeling that something has happened that was meant to be.

Do you ever get that feeling?  Like someone (a mentor, a lover, a friend, a teacher), or something (an opportunity, a challenge) dropped out of the sky, usually unexpectedly, and influenced your life in a way that was SO FREAKING UNBELIEVABLY AWESOMELY PERFECT that you can hardly stand it?   And then that thing lead to something else that was awesomely perfect and then THAT lead to…well you get the idea.  Like it was meant to be.  Sometimes you see it more clearly in hindsight, but it’s there.

I’ve been acutely aware of this happening several times in the past ten years.  I can actually trace a timeline of these events and pinpoint how they have lead me to where I am today:

1. I moved to Ottawa.  It seemed extremely far and I was scared shitless and really had no idea what I wanted to do with my life, but my mom somehow convinced me I’d make a good journalist.  So off I went to Carleton U for journalism.  It was random, but being in Ottawa, at that University, worked out well for me.  It was meant to be.

2. That winter I took an elective course entitled “Natural History of Ontario”.  I only took it because I was an idiot freshman who didn’t understand how timetables worked and it was the only class I thought could fit into my schedule.  The class was taught by a naturalist of epic genius who is, without a doubt, one of the most amazing teachers on the planet.   I was enthralled.  With no hesitation whatsoever I quit journalism at the end of that year, caught up on science-ey stuff in summer school and came back in the fall as a new Biology student.  It all happened because of a moment of frosh naïveté, but it got me on a new career path.  It was meant to be.

3. In my third year of undergrad studies, I put a ridiculous amount of debt on my credit card so I could study bats in the tropical rainforests of Belize for three weeks. I thought it would be fun.  What it REALLY did was tell my brain, in no uncertain terms: YOU SHOULD BE A BIOLOGIST.  It happened because of a spur-of-the-moment decision, and I almost missed out on getting summer employment.  But it really sealed the deal of the whole biology/research/field work thing.  It was meant to be.

4. I met my future thesis supervisor.  She took me under her wing, showed me the ropes and then set me loose to prove to myself that I was capable of conducting meaningful research, and communicating about it.  I completed two theses with her guidance.  She made me work and write and speak and apply for things until my CV was pretty well-padded.  I could have worked with anybody in the university, but I worked with her, and she worked her butt off to help me grow.  It was meant to be.

Then I took a break.  I stepped away from the academic world for four years.  I worked in a lab, a park, a museum, and later in cubicles, getting farther and farther away from what I really loved to do.  Somehow, “what I want to be when I grow up” was a concept I was never fully able to actualize.  I just knew I wasn’t terribly happy.  Then:

5. I got my current job, the one from which I’m fleeing shortly.  This was the clincher.  Not because I dislike it, no, dislike alone is not sufficiently motivating to make you leave a job that’s permanent, well-paying, and offering good benefits.

What happened was, it exposed me to other people like me.  I mean the type of person I COULD have been had I carried on with my studies: researchers, academics, professors.   All in love with their work, their schools, their students.  I found myself insanely jealous.  I wondered why I felt that way.  I thought long and hard, then had my “aha!” moment, which sounded a lot like “Duh, you’re supposed to be DOING that kind of work, dummy!”  Oh.    Had I not been in my current job, where I was able to interact with these academics, the “aha!” would never have happened.  Or it would have happened a long time from now.  Possibly when it was too late to do anything about it.  It was meant to be.

6. So then I fished around for labs.  Dr. B seemed to be doing reasonably interesting work.  We chatted, clicked and then… he told me about an project he was working on…something completely new and outside of the realm of the research I was expecting to be able to do in his lab…something UNBELEIVABLY AWESOMELY PERFECT and totally unexpected.  To which I replied: sign me up brother!!!  It seemed totally meant to be.

All of these events/people/circumstances have led me to where I am right now: about 7 weeks away from a new research program, a new university, a new degree and most importantly, a new career.   All of which I am so freaking excited about.

Was it dumb luck that these things happened?  At the right time, in the right place?  Probably.  But I really think the reason it’s all turned out so UNBELEIVABLY AWESOMELY PERFECT is because I did a few things:

1. I kept myself open to new opportunities
2. I was willing to deviate from the path I currently had in mind for myself
3. I made myself take risks, even…no ESPECIALLY…when it scared the pants off me

These go hand in hand (and arguably all mean the same thing).  Whatever.  It works.

And when karma offers you a sweet deal, for the love of pete, TAKE IT!

Like Loading...
Getting to grad school, Work grad school, life in a cubicle, rant, why I need to change careers

When it comes to jobs, there are a few basic tenets I tend to adhere to:

As much as I am disenchanted with my current employ this is still my modus operandi.

I also abide by the notion that as long these two things are happening, if you work an extra 30 minutes one day and don’t claim overtime, then that time is yours to take another day.  It saves paperwork.  It helps maintain a sense of autonomy and self-direction.  Many would argue that this kind of workplace flexibility (the trendiest form of which is probably teleworking) also makes for happier, more productive employees.

On that note, there are few things that burn my butt more than Office Police.  You know the type: they’re like gophers, popping their heads over the walls of their cubicles to see whowhatwherewhenwhy at the slightest indication of movement beyond their beige, fabric-covered dens.    These are the coworkers who have a photographic memory for clocks and can tell you what time you arrived, when you had lunch, when you left at the end of the day, and how long it took you to go take a piss.  And if the time in between doesn’t add up to your daily 7.5, god help you ’cause they’ll rat you out.

So I don’t know which Office Police squad member got their knickers in a knot and started stirring things up, but the Sheriff of Officetown (i.e., our boss) had a huge hissy fit today.   All employees were told the following: lunch is 30 minutes.  Breaks are 15 minutes x 2.  Breaks include the time spent getting water from the fountain and trips to the bathroom.  Lunch and breaks are not to be combined into a one-hour lunch.  If you want a one-hour lunch, you make up the time at the end of the day.

I’m sorry, but this pisses me off.

If I really needed someone to dictate and monitor my every move, breath and fart in order to ensure that I had a productive work day, I would be a piss-poor employee.  If I was THAT incapable of managing my time and ensuring that the powers that be got their money’s worth out of me, I never should have been hired in the first place.

This is not day care, it’s a workplace.  And rather than improve productivity, these kinds of edicts do nothing but piss people off (thereby making them extremely UNproductive).   It’s such a back-asswards and archaic mentality…gosh, no WONDER it’s so prevalent in the public service.

Is my letter here yet?

There was no damn letter in the mail last night.  Trying to stay “meh” about it…it should come eventually…but I need the damn letter so I can start applying for other funding opportunities, many of which have deadlines of, oh, NEXT WEEK.  Whatever.

It snowed today, like, really truly snowed.  I wanted to walk in it, so I escaped my desk at lunch.  Grey, damp, chilly, forgot my mitts and returned with numb, red hands (glee). 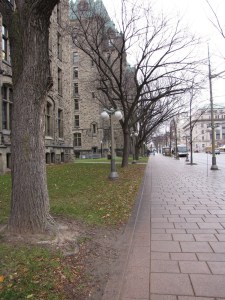 Sometimes I forget how lovely it is downtown.  When you see something every day for years you often lose your appreciation for it.  Guilty as charged.  I know nothing about architechture, but I do love the stone, sweeping archways and oxidized copper rooftops.  There are all kinds of wonderful, carved, fairy-tale-esque details hiding in unexpected nooks: 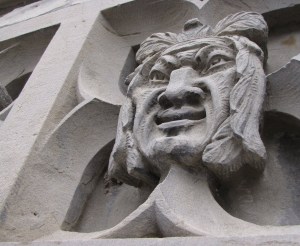 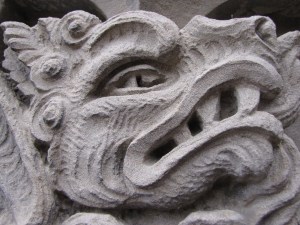 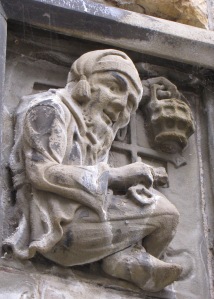 I love the fact that you can walk right up onto Parliament Hill and no one bats an eye. 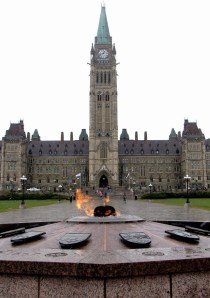 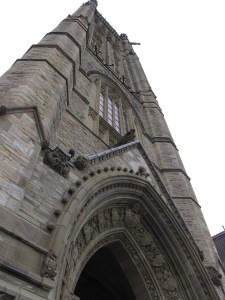 There are two guarantees in life: death and taxes.  Oh, and also that there will be a protest downtown at any given moment.  Today it was the museum workers: 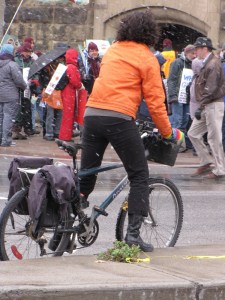 Oh yeah.  And THIS lovely display, right in front of the Eternal Flame:

Good thing he brought all his supporters so he could REALLY make a statement *insert eye roll here*.  What a loon. 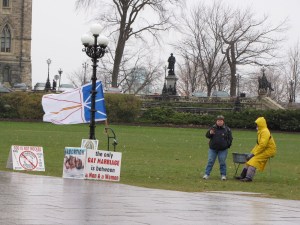 I usually am the type of person who will calmly and rationally try to educate people about this sort of thing, but someone like this?  Impossible.  It’s a waste of energy and oxygen.   Just once though, JUST ONCE, I’d like to hear an argument for why my marriage is so gosh-darn offensive which DOESN’T involve the word “god”, “bible”, or any some variation thereof.   Blarg.

Speaking of loonies.  There’s a rather poignant sculpture outside St. Andrew’s church on Wellington, of a homeless person.  His bowed head and hunched shoulders are covered by a blanket.

His right hand is outstretched: a silent, universally-understood request. The sculptor had incorporated an actual one-dollar coin into the piece. Sadly: 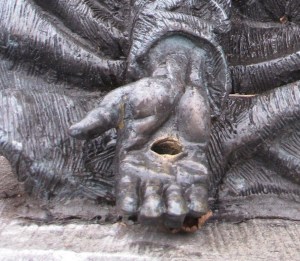 I hope that, at least, it was someone who really needed it.

Enter your password to view comments. Posted by TGIQ on November 2, 2009